From the Childhood of Jesus

One Saturday morning he went to the river to play.
He molded twelve sparrows out of the river clay

And scooped a clear pond, with a dam of twigs and mud.
Around the pond he set the birds he had made,

Evenly as the hours. Jesus was five. He smiled,
As a child would who had made a little world

Of clear still water and clay beside a river.
But a certain Jew came by, a friend of his father,

And he scolded the child and ran at once to Joseph,
Saying, “Come see how your child has profaned the Sabbath,

Making images at the river on the Day of Rest.”
So Joseph came to the place and took his wrist

And told him, “Child, you have offended the Word.”
Then Jesus freed the hand that Joseph held

And clapped his hands and shouted to the birds
To go away. They raised their beaks at his words

And breathed and stirred their feathers and flew away.
The people were frightened. Meanwhile, another boy,

The son of Annas the scribe, had idly taken
A branch of driftwood and leaning against it had broken

The dam and muddied the little pond and scattered
The twigs and stones. Then Jesus was angry and shouted,

“Unrighteous, impious, ignorant, what did the water
Do to harm you? Now you are going to wither

At once, the boy was all withered. His parents moaned,
The Jews gasped, Jesus began to leave, then turned

Before these heavens and this earth were made,
The Creator set a jewel in the throne of God

With Hell on the left and Heaven to the right,
The Sanctuary in front, and behind, an endless night

Endlessly fleeing a Torah written in flame.
And on that jewel in the throne, God wrote my name.”

Then Jesus left and went into Joseph’s house.
The family of the withered one also left the place,

Carrying him home. The Sabbath was nearly over.
By dusk, the Jews were all gone from the river.

Small creatures came from the undergrowth to drink
And foraged in the shadows along the bank.

Alone in his cot in Joseph’s house, the Son
Of Man was crying himself to sleep. The moon

Rose higher, the Jews put out their lights and slept,
And all was calm and as it had been, except

In the agitated household of the scribe Annas,
And high in the dark, where unknown even to Jesus

The twelve new sparrows flew aimlessly through the night,
Not blinking or resting, as if never to alight. 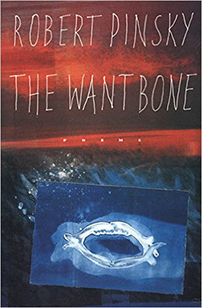 For readings or performances by Robert Pinsky, please contact Eliza Fischer of the Steven Barclay Agency: